For the previous posts in this series click Part 1, Part 2,  Part 3, Part 4, Part 5,  Part 6a, Part 6b, and Part 6c.  This post contains affiliate links.  If you make a qualifying purchase after clicking a link, we may receive a percentage of the purchase price.

One oft-repeated piece of advice is that you should plan meals before you go grocery shopping and only buy what you need for those meals.  I don’t adhere to this advice because it does not work for the diverse dietary needs of our household, which I described in a post written prior to the start of this series.  I either have meals in the freezer or I have components made so I can assemble quick meals.

When I cook, I’m either cooking several meals at once and packaging them for the freezer, making components so that I can have everything ready for a quick meal, or I’m putting together a quick meal.  Cooking in this fashion makes buying in bulk a reasonable option for a small household and allows me to make the best use of sales.  It also means that what we eat on any given day  is easily adjusted based on our particular food cravings and schedule.

I had an eye doctor appointment at 3:00 pm.  The doctor’s office is a bit of a drive and they ended up combining my two appointments (I was supposed to have another one on Thursday) into one, so I ended up being at the doctor longer than expected.  The doctor dilated my eyes, which made it difficult to see for two or three hours after the appointment.

We were also started laying tile in the bathroom.  We worked on that until about an hour before we needed to leave for my appointment.  When we got home we worked on it for another couple of hours. 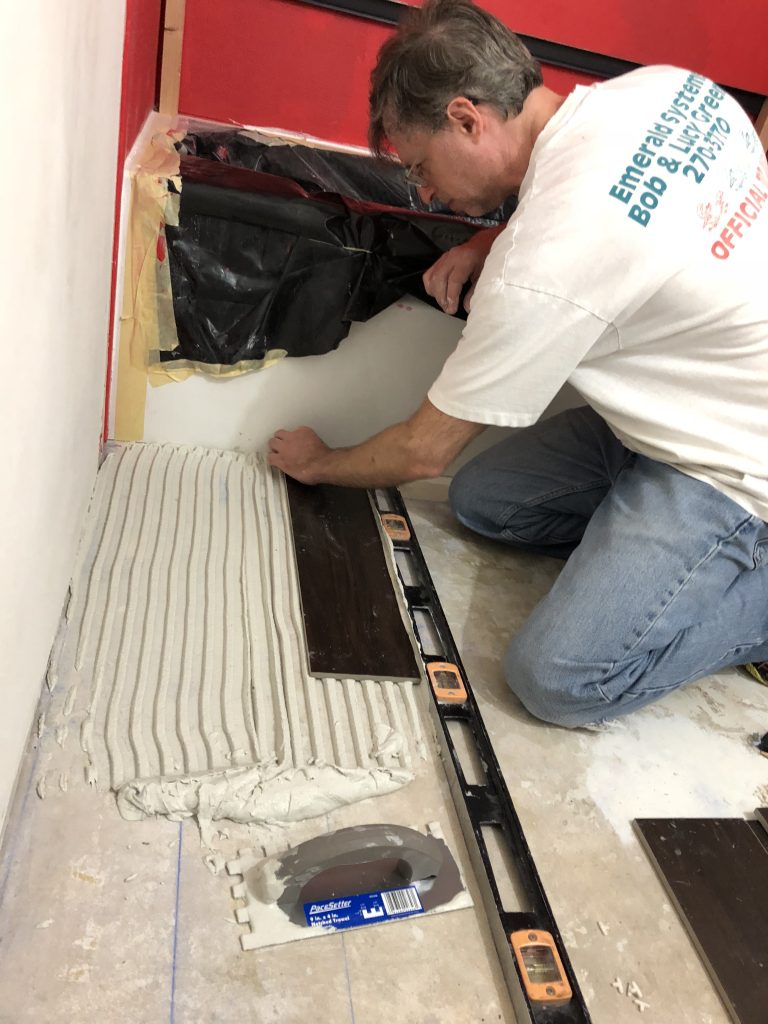 It was 7:30 pm by the time I was contemplating dinner, I was feeling rather tired and a little woe-be-gone, for no apparent reason.  I was seriously craving Indian food.

It’s not a surprise that I was craving Indian food.  It was my favorite cuisine in the world, even before I got to go there.  We spent a couple weeks in Indian in 2015 — Chris had to go for work and I tagged along.  I ate Indian food 3 meals a day the entire time, despite the easy availability of Western food in the very Western hotel where we stayed.  When we were leaving, Chris asked if I was tired of Indian food.  Answer: Absolutely not.  Indian food is comfort food to me.  It’s the food I crave when I don’t feel well, physically or mentally.  Just the smell of Indian cooking can lift my spirits.

So it’s late and I’m hungry and a little despondent and I have no Indian food in the freezer.  I started perusing the take out menu of the nearest Indian restaurant.  It’s expensive and they don’t deliver and it’s at least 45 minutes round trip for me to pick it up myself.  I considered going to Publix and getting a frozen Indian dinner.  They are less expensive and since Publix is closer, it would be faster.  But the portion is very small and the flavor, while not terrible, isn’t particularly authentic.

Finally, I did what I should have done in the first place.  I pulled out my copy of the Indian Instant Pot Cookbook by Urvashi Pitre (Amazon affiliate link) and turned to the Chana Masala recipe (that’s chick peas in a flavorful tomato-based sauce).  Even if it took me a hour to make the recipe, that’s not much longer than getting take out, it’s a lot cheaper, and the flavor is as good as the restaurant.

When I looked at the recipe, I realized I could have it done in 20 minutes, because I had all the time-consuming parts of the recipe already made.  All I had to do was combine them with the other seasonings and let everything cook for 15 minutes to warm up and allow the flavors to blend.

There’s three potentially time-consuming parts of the recipe — cooking the chickpeas, making Onion Masala, and making the chana masala spice blend (the recipe suggests purchasing a blend).  Last week, I cooked up two pounds of dried chick peas, intending to make hummus and falafel, but haven’t gotten around to making them.  Several months ago, I made a huge batch of Onion Masala and froze it in smaller batches, in the portion size needed for this Chana Masala recipe.  A couple months ago, I made my own chana masala spice blend and stored it in the cupboard.

I also already had two specialty ingredients, one which the recipe requires and the other of which the recipe suggests.  The required ingredient is ghee, a clarified butter.  While it is possible and easy to make ghee at home, I have a store-bought version, leftover from the butter tasting I mentioned in Part 5 of this series.  The suggested ingredient is amchoor (also spelled amchur) powder, which is made from unripe, sour mangoes.  Chana Masala requires some acid, traditionally achieved by using amchoor.  The Indian Instant Pot Cookbook calls for lemon juice because people only have amchoor in their pantries if they regularly make Indian cuisine and the cookbook is intended to reach an audience beyond those regularly making Indian cuisine.  However, the recipe has a side note telling you how much amchoor powder to use if you wish to omit the lemon juice.  I have amchoor powder in my pantry so I used that instead of lemon juice.

I also had some leftover basmati rice in the refrigerator, so didn’t even have to cook rice.  This is what it looks like when all the cooking and shopping strategies I’ve described work together — from craving to finished Indian dish in 20 minutes, entirely cooked from scratch. 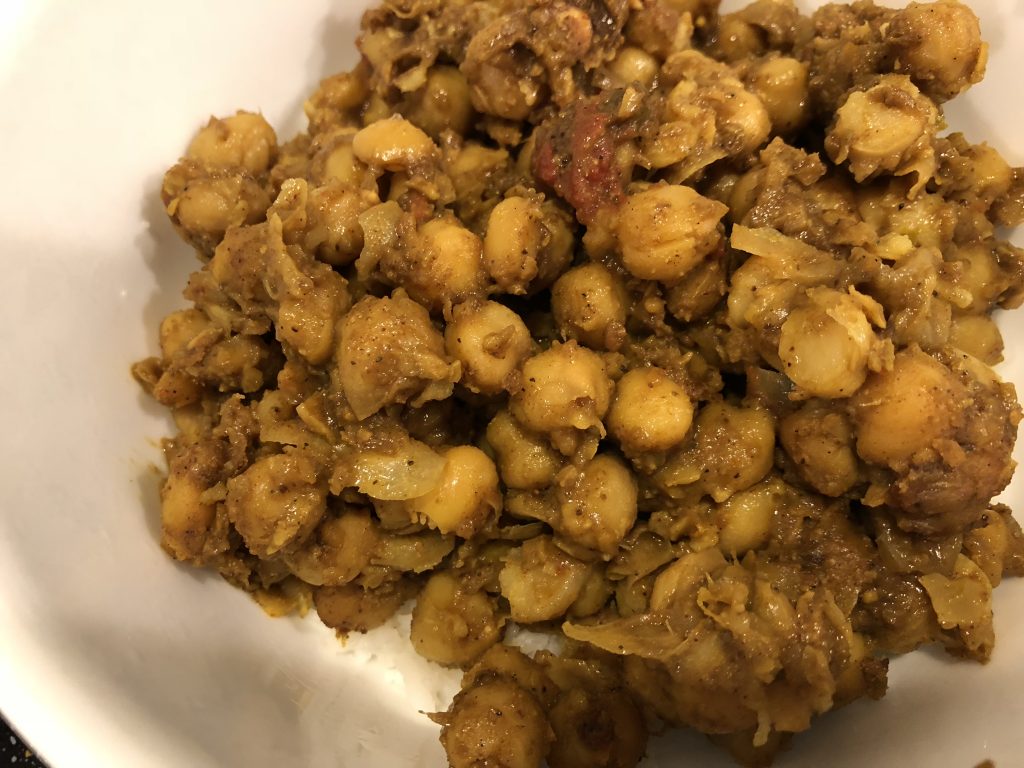 It cost roughly $4 to make the chana masala, including the cost of the Onion Masala, chana masala spice mix, and the rice.  The quantity I made is the same as two restaurant portions, which would have cost $25 plus tax and tip, and the size of at least four, maybe as many as six frozen channa masala premade meals, purchased at Publix for a cost of $20 – $30 total.  I got exactly what I wanted, faster and at 15-20% of what I would otherwise spend.

Chris has to eat, too

In case you’re wondering, Chris had what he was already planning to eat — a turkey burger.  He buys 1 pound packages of ground turkey and makes four burgers at once.  He also cooks up four strips of bacon. 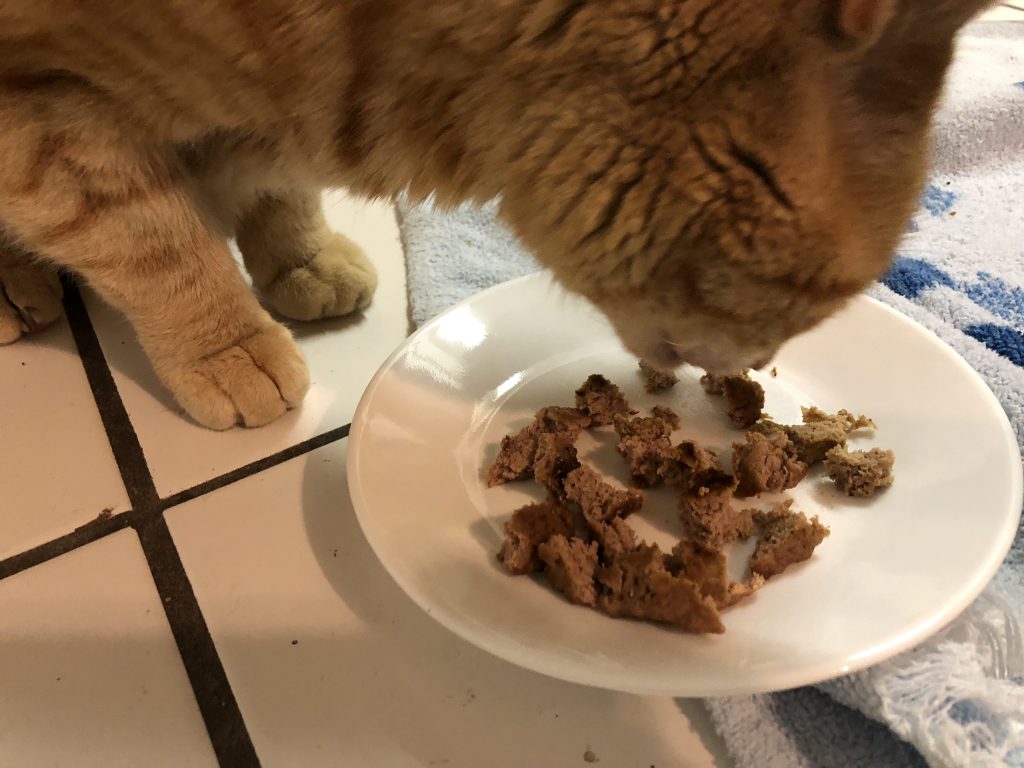 On days like today, when neither of us fancy doing a lot of cooking, Chris takes one of his precooked burgers and a precooked strip of bacon from the refrigerator, warms them up in the toaster oven, toasts some bread and assembles his sandwich.  The bread and ketchup on his sandwich are not homemade (gluten free bread is on my list of things to learn how to make) and the lettuce is store-bought because we aren’t running our hydroponic system at the moment.  The sandwich costs roughly $3 to make and takes only a few minutes to assemble when all the components just need to be toasted.

I decided to sneak this extra post into the series because it provides such a beautiful illustration of how all the various pieces I’ve been describing come together in our day-to-day lives.  It is true that the shopping and money-saving tools I’ve described in this series so far can take a little time to implement.  It is also true that implementing these tools can save you time when you are in a crunch.  When all the pieces come together as intended, which they did for us yesterday, I think it makes the time spent on implementation worthwhile.

One Reply to “Early Lesson, Part 6d: Calculating the Cost of Homemade: Putting it All Together”